Rheumatoid arthritis (RA) is a chronic inflammatory disorder that typically affects more than just your joints. RA is an autoimmune disorder, ie, a disease caused by unwanted activity in the immune system, where the immune system mistakenly attacks your body’s own tissues. RA affects the lining of the joints, causing a painful swelling that can eventually result in bone erosion and joint deformity. RA is often associated with symptoms from other organs including the skin, eyes, lungs, heart, and blood vessels. While new types of medications have improved treatment options, significant unmet needs still exist. For most patients, RA still progresses, and damage accumulates. Patients cycle through therapies and classes of therapies and must deal with periods of acute disease activity called flares, which can occur several times per year and drive the need to adjust the dose of current drugs or to change to a new therapy in an effort to maintain control of the disease.

AP1189 is being evaluated in a Phase 2a proof of concept (POC) trial in newly diagnosed patients with severely active disease as an add on therapy to methotrexate in previous methotrexate naive patients.  MTX is a disease-modifying antirheumatic drug (DMARD) that is typically used as a first line of therapy.  MTX tends to work well in most patients, but it can take up to 6-8 weeks for the drug to take effect, and up to 40% of patients will not achieve a full response to MTX therapy and will require dose escalation or the addition of additional drugs like biological therapies which can induce a higher degree of immunosuppression.

The Phase 2a trial, named BEGIN, is assessing 2 doses of AP1189, 50 mg and 100 mg vs placebo as add-on therapy to MTX treatment. All patients are initiated on MTX and on the same day randomized to receive either 50 mg or 100 mg of AP1189 or placebo given orally once daily for 4 weeks. The trial is designed in 2 parts with an interim safety assessment conducted by the trial’s appointed Drug Safety Monitoring Board (DSMB) to assess initial safety and efficacy in the first 26 patients (Part 1), followed by a continuation of the study for either or both AP1189 dose groups, depending upon the DSMB recommendation. 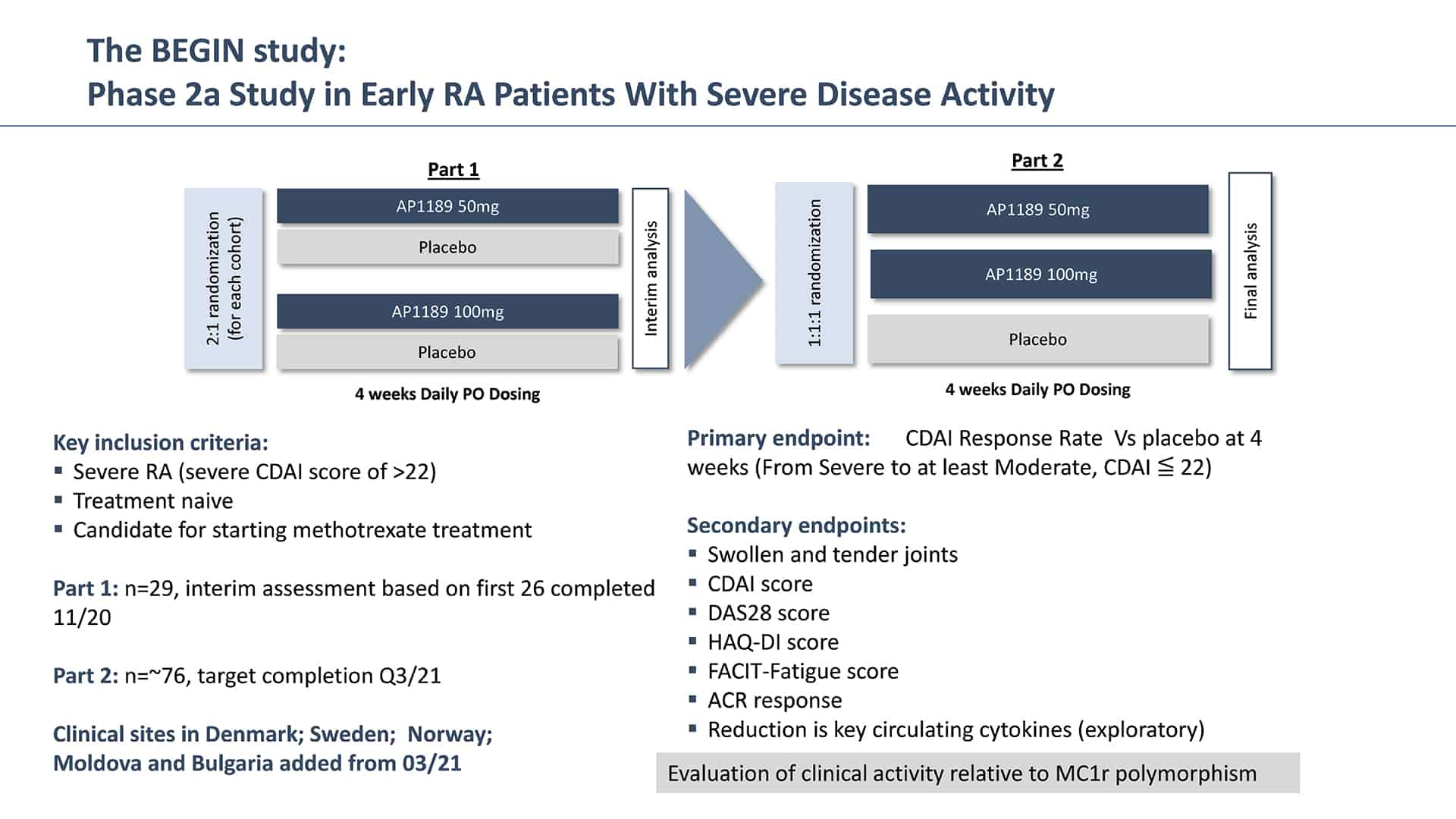 The DSMB conducted the planned interim safety assessment in November 2020 and notified SynAct that both doses were viewed as safe and well tolerated and recommended that both be continued in Part 2 of the study. The DSMB stated that there were no safety concerns seen in Part 1 of the study, with no reports of any serious adverse events. The overall frequency of adverse events was comparable between the 2 treatment groups, while numerically higher for the 100-mg dose group. The most common adverse event seen across all groups was nausea, but this did not lead to any patients discontinuing therapy or dropping out of the trial.

The DSMB also assessed initial topline efficacy data from the 26 patients in Part 1 of the study. They found that patients treated with AP1189 had a higher numerical likelihood of responding, as compared to placebo, with response rates of 67% for 50-mg AP1189 and 75% for 100-mg AP1189 vs 44% for placebo. A response was defined as patients going from severe disease activity to at least moderate disease activity after 4 weeks of treatment. 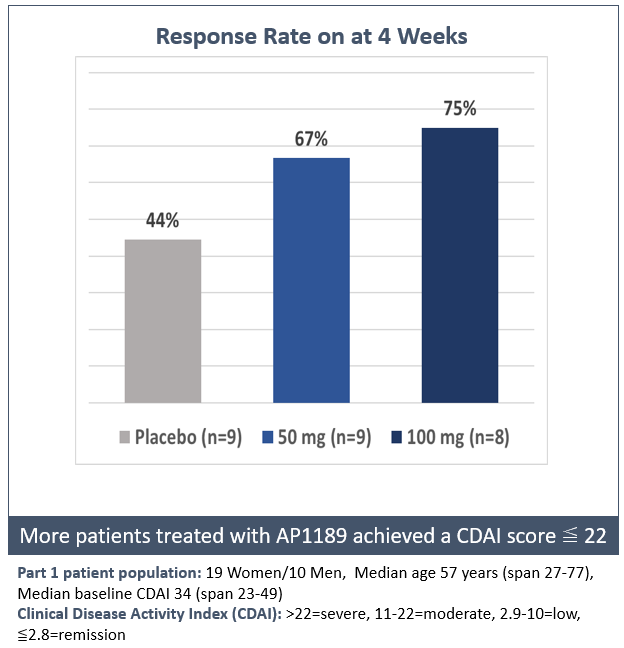 Based upon this initial promising data, SynAct announced a trial expansion in May 2021, increasing the overall trial size by up to 20 patients in order to increase the probability of demonstrating statistical significance in this POC trial. Trial recruitment is completed and SynAct expects to conclude the trial in Q4 of this year with top-line presented by the end of November, 2021.

Potential Utility of AP1189 in RA—The emerging clinical profile of AP1189 could potentially support multiple uses in the treatment of RA:

The emerging clinical profile seen in clinical evaluation thus far of an oral agent with a quick onset of action, a good response rate and no treatment limiting side effects could address many unmet needs in RA and other inflammatory or autoimmune conditions.

Accordingly further development of the compound in Phase 2b should investigate the efficacy and safety of AP1189 in patients who have not experienced a full response to methotrexate or DMARD therapies (DMARD-incomplete response, DMARD-IR).

A safe and well tolerated oral agent like AP1189 that has both anti-inflammatory and pro-resolution effects could potentially delay the need for the use of biologics or other therapies that can induce immunosuppression.

In addition, the AP1189 has the potential to be used as treatment for patients who experience severe acute disease activity (disease flares) several times per year and who are either not fully responsive to, or inolerant of corticosteroids.