The Melanocortin System and Inflammation 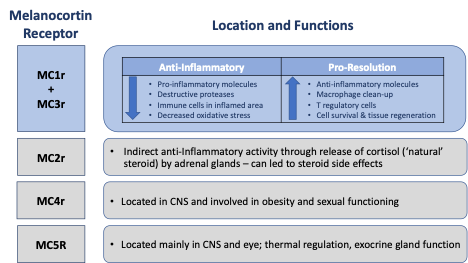 MC1R and MC3R are believed to be the key receptors involved in direct effects on the immune system and these receptors are located on immune cells and associated structural and supportive cells. When activated, MC1R and MC3R provide both direct anti-inflammatory effects, such as causing immune cells to produce fewer pro-inflammatory molecules and stimulating pro-resolution effects such as switching cells to perform inflammation ‘cleanup” or regulatory functions. Through these dual effects, targeted melanocortin therapies can help the immune system resolve excessive or chronic inflammation.

MC2R also exerts anti-inflammatory effects but these effects are indirect. MC2R is predominantly located in the adrenal glands and its stimulation causes the adrenals to release cortisol, the body’s ‘natural’ steroid—a powerful anti-inflammatory and immunosuppressive molecule. Some melanocortin peptides like adrenocorticotropic hormone (ACTH) are potent MC2R activators and can cause significant safety, side effect, and tolerability issues that are common with steroid therapies like prednisone. SynAct’s selective melanocortin agonists do not activate MC2R and do not cause cortisol release.

SynAct is developing selective melanocortin therapeutics to address inflammatory and autoimmune diseases characterized by excessive or chronic inflammation. SynAct’s lead drug candidate, AP1189, is an oral selective melanocortin agonist that was designed to stimulate MC1R and MC3R, but not MC2R, to help resolve excessive inflammation without steroid side effect and safety issues. AP1189 is a biased agonist that stimulates MC1R and MC3R through the activation of the pERK signaling pathway rather than the cAMP pathway which is the classical approach. The cAMP pathway is believed to be responsible for certain off-target activity such as skin hyperpigmentation which is avoided with AP1189.